Winding (us) up with Amen and aWOman

CONFUSING truth in the Church for the State

You may well have noticed that there’s a lot going on in U.S. politics at the moment.

You may also have noticed what arose on 3rd. January 2021 when a congressman who is also a Methodist minister (Congressman Emmanuel Cleaver) prayed as the U.S. House of Congress convened.

If you missed it, he ended his prayer with “amen and awoman” ... and Evangelicals LAUGHED in their polite embarrassment for him.

Winding up with Amen and aWOman

But as people have been chuckling they've been missing the bigger point. It's not just the way Christians end prayers Congressman Cleaver assumed the right to rewrite. It was the essential truth claims of four major world religions.

You see, in the sniggering about Amen and aWOman what's been missed about Cleaver's big gig of the day was that he prayed in the name of the Hindu god Brahma. And he did that calling Brahma “the monotheistic god” known by “many names” to “many faiths.”

The text of the Blunder of the Day

The text of the whole prayer is online here, but to demonstrate, here's how he ended his prayer:

“... we ask it in the name of the monotheistic god, Brahma, and god known by many names, by many different faiths. Amen, and awoman.”

Firstly, that ‘Amen and aWOman’ is nonsense.

“Amen” is simply a Hebrew word indicating endorsement and approval - like saying ‘certainly’ to something someone else has been saying. The word just carried over as it stood into the New Testament’s Greek and into almost every other language into which Christian prayer has since journeyed. ‘Amen’ is in no way connected to the word 'men', and “awoman” isn’t a real word at all.

It’s been suggested recently that “Amen and awoman” makes as little sense as ‘Government and governWOment’.

An exclusive personal god only the Congressman knows about

Secondly, what almost everybody missed was that Congressman Cleaver invented a god there that only he knows about, and he did it in the name of religious inclusion. (You see the problem there? This is nobody's god but his own ... how inclusive can this possibly be?!)

Calling the same what is obviously different 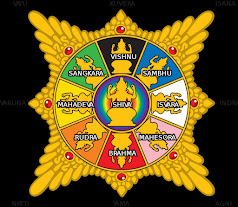 Thirdly, the deities of these different faiths are really DIFFERENT ... not in REALITY remotely the same!
Yes, Rev. Cleaver prayed using loads of Biblical names for God like 'the Lord,' 'eternal God,' and 'the God who created the world and everything in it', but then he ended his prayer:
“in the name of the monotheistic god, Brahma, and god known by many names, by many different faiths.” But Brahma is the name of only one of the Hindu gods ... and there is NO HINT of monotheism in Hinduism!

By Gunawan Kartapranata - Own work,

I'm grateful to those who've pointed out they understand the punctuation differently,
but to me the use of the definite article ('THE monotheistic god, Brahma') indicates
the Congressman was describing this Hindu god as monotheistic.
To fact-check what was said please click here.

Let's be very clear about this: Hinduism does NOT recognise Brahma as a “monotheistic god” like the God of Christianity, Judaism or Islam - in fact Hinduism's said to have 33 million gods!

And, of course, those other three major world faiths are monotheistic faiths insisting there's ONLY one God ... honouring to some degree Deuteronomy 5:7 which says “You shall have no other gods besides Me”!

This is important for several reasons

So in summary by invoking this "monotheistic god, Brahma" Congressman Cleaver didn’t actually invoke either the god of polytheistic Hinduism or of any major religion at all.

What happened when he tried to count everyone in, was that he ruled out the inclusion of any of the faiths that he named!

And it seems that in the preoccupation of Evangelicalism with sexuality and gender equality, these far greater issues seem to have been largely missed.

Christians need to lay hold again FIRMLY to Christ's claim to be unique, following the Christ Who insistently taught "I am the way and the truth and the life. No one comes to the Father except through me" (John 14:6), in the footsteps of His very first followers. Those whose footsteps we follow consistently taught - while facing down the violent threats from exclusively monotheistic Jews and equally exclusively polytheistic Rome - that "Salvation is found in no one else, for there is no other name under heaven given to mankind by which we must be saved." (Acts 4:12).

Of course we need to be ready to EVIDENCE these claims.

And we need to be ready to persevere whilst being unpopular for doing so, as this is the Christ-follower's promised experience (Matthew 10:22).

Daring to tell the Gospel of God: tuning the strings of your heart - 1 Thessalonians 2:2-4

AUDIO In a break-out session at The Gospel Coalition’s 2019 conference in Indianapolis, Jarod Wilson developed some of the themes in his boo...