AUDIO
Oh, a lot of really unusual stuff was happening for the centurion running Jesus' crucifixion detail that day!
Now, earthquakes he'd come across before ... but NEVER graves giving up their dead.
When a comrade in arms in the legion had lost a close friend in a skirmish or a battle ... yes, the hardened old Centurion had heard of similar things happening.
In their grief they were sometimes convinced their good friend came back to them, or spoke to them at night in a dream.
Modern psychology reports such phenomena too.
It's a common human experience that stretches back over time, for an individual to be convinced that they've seen or heard from someone who's died.
But that was NOT what was going on around the centurion crucifying the preacher from Nazareth that day, the One known as 'The King of the Jews'.

Sensory Experience of the Dead

People who have lost a loved one do often report having sensory or quasi-sensory experiences of the dead (SEDs).

A common experience across all cultures

Research into this has been conducted across a range of disciplines including psychiatry, psychology and anthropology (that last one because these experiences spread across a wide range of very different cultures ... many of which have very little cultural contact that might explain SEDs as a learned experience).
So, a recent academic paper showed that SEDs occur across cultures, in all age groups and in all types of relationship loss, regardless of religious affiliation,and whether the cause of death is natural (Like disease) or violent (like suicide, homicide, and natural disaster).

A sense of unreality

What these experiences significantly have in common is that - unlike psychosis - there is generally a very conscious 'reality testing' that takes place when an individual experiences an SED which makes them conscious that this experience (which might well be realistic, and hope-giving in some way) isn't actually real.
It normally isn't like schizophrenia where the delusion remains.
And it's ...

The thing about SEDs though that marks them out is this: they are the experience of one person only.
They take place within one individual mind.
That is the single most significant factor in distinguishing this grieving person's trick of the mind from what we see in our Verse for the Day today.
"... the tombs broke open.
The bodies of many holy people who had died were raised to life.
They came out of the tombs after Jesus’ resurrection
and went into the holy city and appeared to many people."
Matthew 27:52‭-‬53 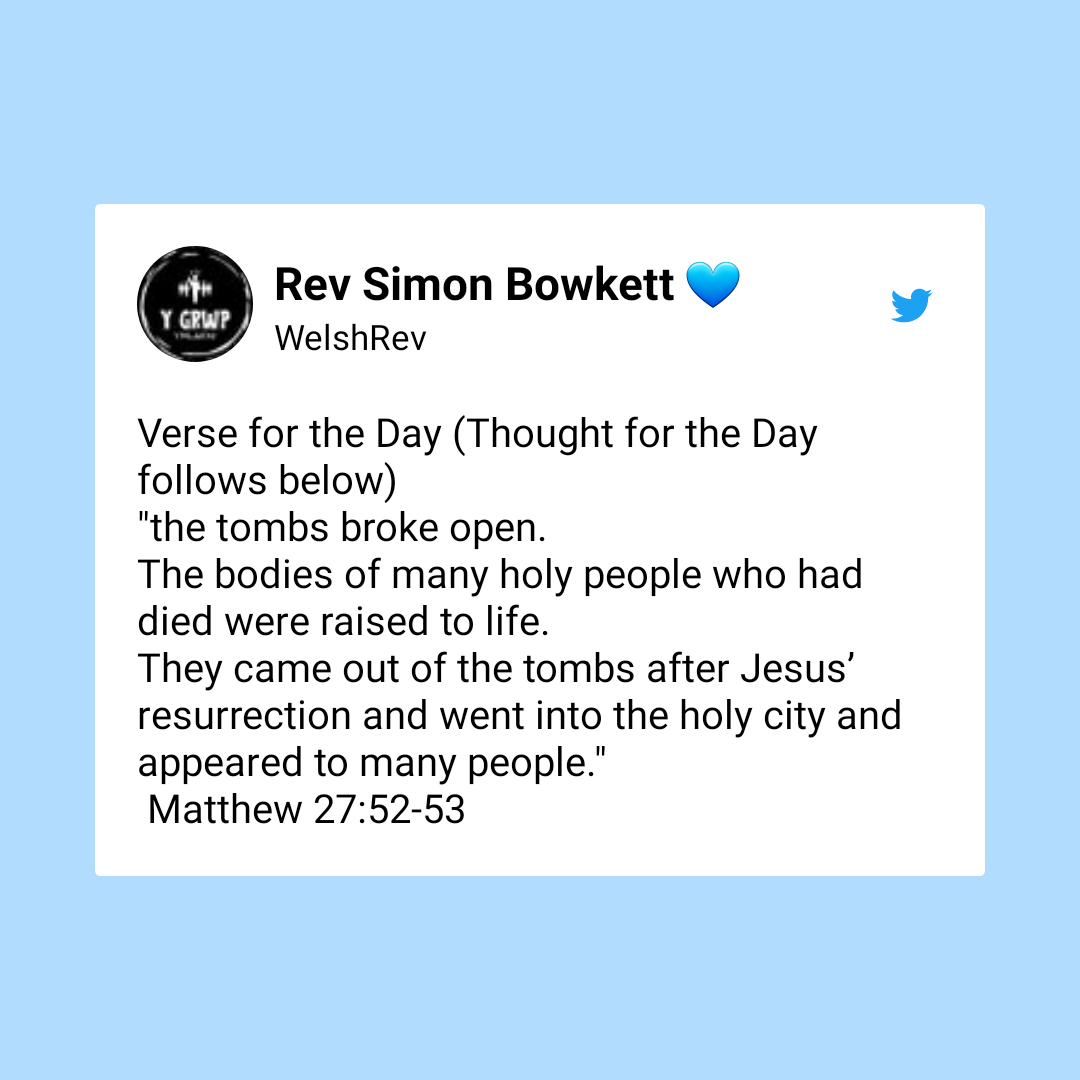 So WHAT is going on here?!

When Jesus let his spirit go and died in Matthew 27:50 there were seven things that immediately flowed from that.

(You can read a fuller account of all seven things HERE.)

Matthew bullet-points those things for us using the Greek word 'kai' meaning 'and':

Here's how it goes:

Placed at the climax of Matthew's account, the most important earthly change that the death of Christ secures is the resurrection of the bodies of God’s people, the saints.

It's a token of what will happen, given in advance.

This is definitely being written up for us as NO WAY an SED.

Matthew is very specific about this.

All seven of the bullet points Matthew gives us are things happening in the material universe.

And that INCLUDES this account of the resuscitation of these peple as a direct result in the material world of the cataclysmic event of Christ's death.

And after Christ's resurrection, these raised dead people went into and were widely  witnessed behaving like live people inside the densely packed Passover pilgrim-populated city of Jerusalem.

Christ's Death Is the Ground of Resurrection

Matthew says that when Jesus died, and before the resurrection of Jesus, tombs were opened, and bodies of saints were raised.

Even though it sounds very strange, Matthew locates the raising of the bodies of the saints at the death of Jesus, and their coming out of the tombs and entering Jerusalem after the resurrection.

Grammatically, that phrase “after his resurrection” attached to the going into the city, not to the  earth shaking and the opening of the tombs ... so this resuscitation or resurrection of these dead folks was no transient, delusional experience.

These folks were walking about the place for days while Jesus wsa Himself in the tomb.

Matthew is showing us the foundational and essential power of the death of Jesus as the cause of resurrection life in natural bodies. These bodies were raised at Jesus’s death, and then went into the city at Jesus’s resurrection.

If this isn't a  fantasy, is it mebbe a myth?

Matthew doesn't intend to be presenting us with a myth:
“. . . and [they] appeared to many”  is what it says in Matthew 27:53
“Many” raised saints are seen by “many.”
In other words, this was not a solitary visionary experience, a hallucination like any sort of SED we know about.
This was many raised bodies appearing to many living inhabitants of Jerusalem.
Matthew says it was real, physical, and public.

But is Matthew a reliable witness?

The general consensus seems to be that Matthew was written between 50 and 70 AD placing that book well within the lifetime of people who saw these things, and that it was written particularly for a thooughly Jewish audience.
Historical accounts that are disproven by eye-witnesses tend not to retain credibility and retain circulation.
And this Gospel wa written for the community of the Jewish people, many of whom would have loved to show it was wrong!
If the opponents of Christianity (of which there were plenty) had been able to discredit this Gospel they'd have done so, but they clearly weren't able to and Matthew's Gospel has retained its' integrity.

Matthew's point in telling us about the raising of many saints bodies as Jesus crried aloud and gave up His spirit seems to be that it is His sin-atoning death that seals the resurrection of the His people that follow Him, ever after.

We owe our future resurrection foundationally and essentially to the death of Jesus, because the greatest obstacle to our resurrection was removed when He was sacrificed for sin, not three days later at the Lord's resurrection.

What caused people to die was sin and God’s righteousness.

Ezekiel 37 showed that God can put decayed bodies back together with no more than the command of His voice.

But something else has been going on here, as it is the penalty of sin paid by Christ's death on the Cross that results in the cancellation of the effects of sin and Fall.

There is such a lot  to rejoice about here, on account of Christ's sacrifice cancelling the effects of human sin in terms of human death.
These events were real, physical and public.
Christian hope isn't about vapid dreams.
Jesus has paid the price with His death on the Cross and the foretaste in Jerusalem in those days seals our future reality.
If you haven't committed your life to following this Jesus and benfitting from all this, then this Easter might be a good time to ask yourself ... why on earth have I not, and what on earth do I think am I DOING?!
These are really important maters to be considering and if you have questions you'd like to raise, problems you'd like to share or if you'd like us to send you something, perhaps in the post if you are UK based, that might help you in this considering these matters then please contact us using the contact form below.
at April 01, 2021

AUDIO Let me be honest ... I'm not a great Royalist. But even I haven't failed to notice, with a certain sadness, the passing of a ... 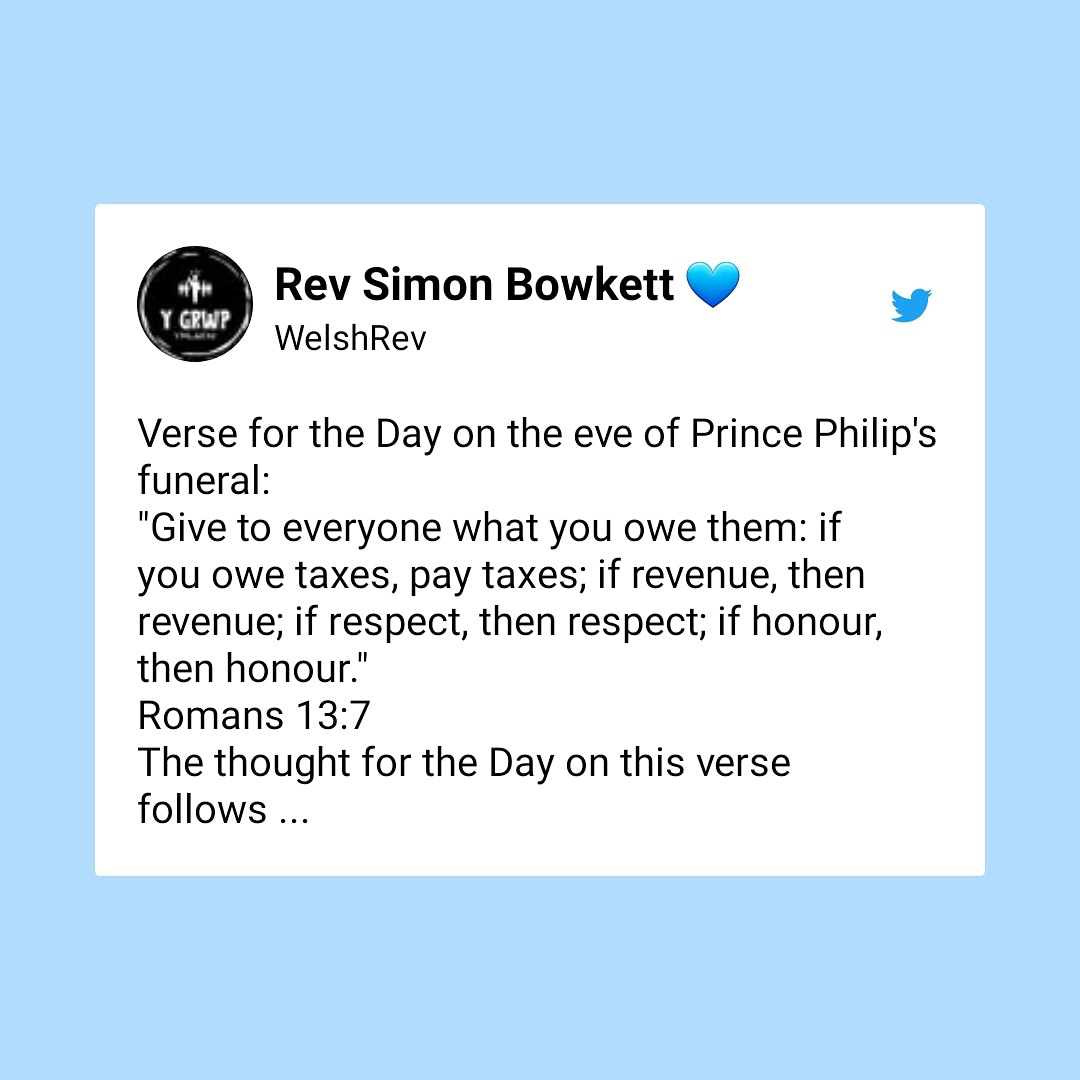