My eldest son does 24- hour mountain bike races, and my youngest has just announced he wants to start training for a marathon hill race.

What IS it that makes people want to do this stuff?

Well there seem to be two sides to that coin ...

At the end of a marathon effort you can get two reactions - and the balance to be kept between them is a fine one, because there's quite possibly a bit of both reactions kicking around in the mix.

What two reactions am I talking about?

Well, just picture in your mind's eye the cry of  'Finished' as an exhausted runner crosses that line ... the cry of 'finished' there can either be about the task or about the person themselves.

It can mean 'I'm finished' (which is probably true anyway!) or it can mean 'I've achieved the objective that I set myself, and have completed my task', and the sense of that last one is of course really rewarding.

Welcome to the Thought for Good Friday!

It would be easy to hear Jesus's final cry of 'Finished!' in John 19:30 and assume that He was simply saying now that He was 'all-in'.

Quite understandable, of course.

He WAS no doubt exhausted in body and spirit.

But it looks as if there were a couple more things that John is telling us were going on here, so this isn't simply a cry of capitulation at the end of a tortuous passage from this life.

Listen carefully to the way that John's Gospel puts this here:

"When he had received the drink,

Jesus said, ‘It is finished.’

With that, he bowed his head and gave up his spirit." 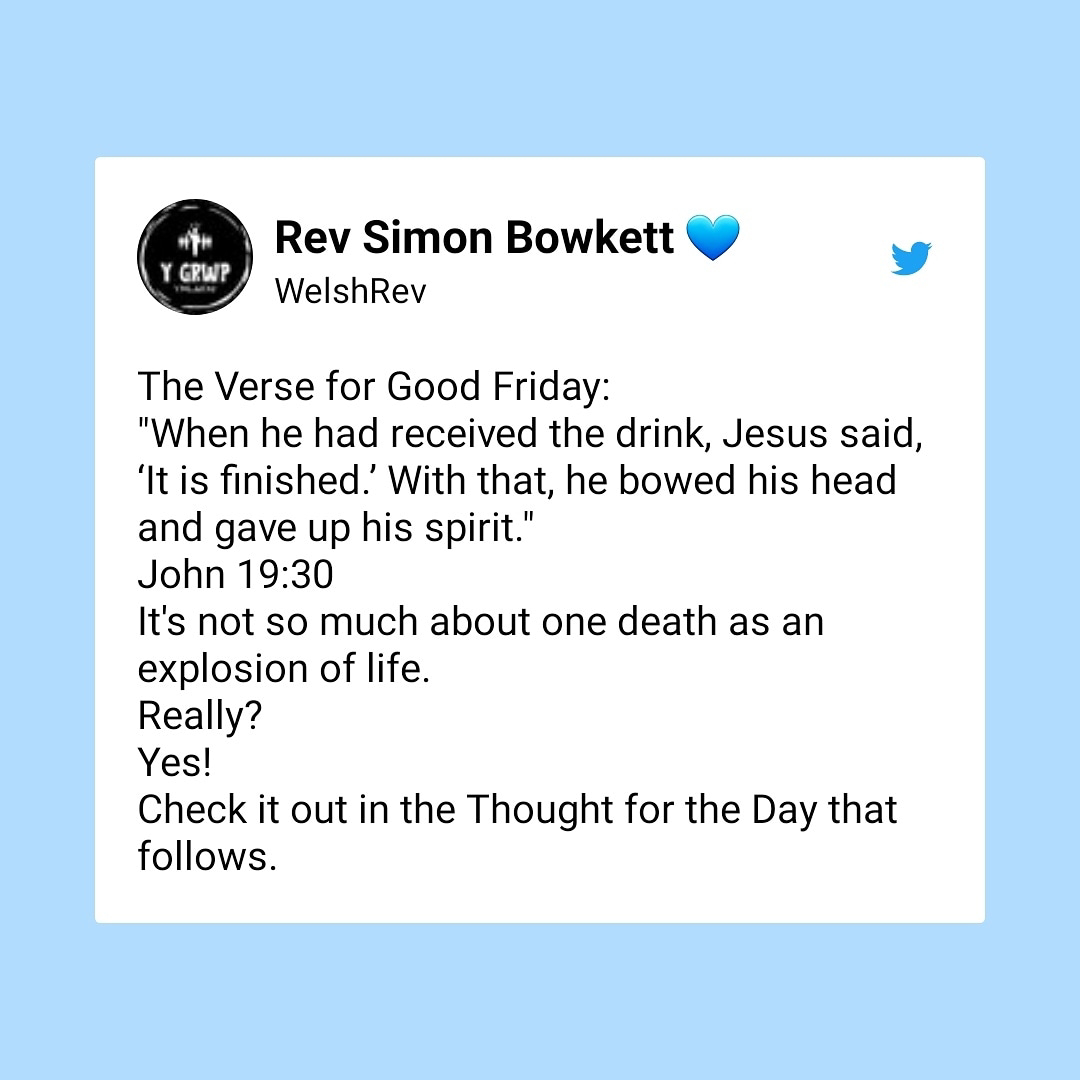 This verse inj the original Greek language starts 'Then when'.

There's a definite sense that there was this one last thing that needed to be done and 'then when' Jesus had finished that final thing (having that drink) He said ... 'It is finished'.

We'll see why in a minute!

There's an interesting word used here to express the ending of something that's taken place.

It's not like when te credits start to roll at the end o a film and you might see the words 'The End.'

This is far more a word for having arrived at a target or a goal ... there's a sense of accomplishment here that mustn't be missed, so in the attempt to get at that Bible translastors opt for phrases like 'It is accomplished over 'It is finished' or 'It is ended'.

It's much more like the declaration 'done' when a new deal has been completed and hands are struck as the satisfying price is agreed, accepted and paid.

So what is it that has beenn concluded, achieved and ended?

Firstly, the Lord's holy life ... and that's reallly important for us.

There's no DOUBT that Jesus' earthly life was just about finished.

His struggle with sin was now just about over.

This was a phenomenal achievement in itself, and meant that His perfect record with God could be reckoned up and placed against His followers' account.

Secondly, what's been achieved now is His fulfilment of Old Testament prophecy.

His fulflment of prophecy - sour wine

Why was Jesus receiving sour wine as He hung on the Cross?

He has realised the end is drawing near! Why now?

"Later, knowing that everything had now been finished,

and so that Scripture would be fulfilled,

Jesus said, ‘I am thirsty.’

A jar of wine vinegar was there,

so they soaked a sponge in it,

put the sponge on a stalk of the hyssop plant,

and lifted it to Jesus’ lips."

What Scriptures are getting fulfilled here?

Well, to start with, Psalm 22 has clearly been on the Lord's mind already because earlier sayings of His from the Cross come from this psalm.

The underlying experience that gives rise to His 'I'm thirsty' also comes from this psalm:

And then in terms of what happened to slake the Saviour's thirst, of course, there's Psalm 69

""You know how I am scorned, disgraced and shamed;

all my enemies are before you.

Scorn has broken my heart and has left me helpless;

I looked for sympathy, but there was none,

for comforters, but I found none.
21 They put gall in my food
and gave me vinegar for my thirst."
Psalm 69:21
Jesus is fulfilling prophecy here.
Thirdly and rather interestingly this marks the fulfilment of the Lord's servant task.

Throughout the prophecies of Isaiah in particular about God's coming Saviour ther is an emphasis on His being God's Servant to th world ... you may be familisar with 'The Servant Songs' of Isaiah.

Now, it isn't obvious from our English translations, but there is an important lexical link between this passage and the same word for 'it is finished' τετέλεσται (tetelestai, “It is ended”) in John 13:1 which says.

"It was just before the Passover Festival. Jesus knew that the hour had come for him to leave this world and go to the Father. Having loved his own who were in the world, he loved them to the end."

(It's in the translation there in that phrase 'to the end' that this same word recurs).

So what's going on between John 13 and John19 is that the full extent of Jesus’ love for his disciples is not merely seen in his humble service to them in washing their feet. The full extent of his love for them is demonstrated in his sacrificial death for them on the cross.

The footwashing episode in John 13 is a prophetic act, or acting out beforehand, of the humiliating and self-abasing sacrifice of His upcoming death on their behalf. And He's DONE it!

The message for the disciples was that they were to love one another not just in humble, self-effacing service, but were to be willing to die for one another.

At least one of them got this message eventually, though none understood it at the time (see 1 John 3:16).

That cry of accomplishment 'It is Finished!' that came from the Cross then, was a celebration of the satisfactory completion of Christ's sacrifice for sin on our behalf ... our behalf if we follow this Saviour.
Yes, the work He'd come to do was now ended, but the sense that it was complete and accomplished is the central plank of New Testament Christianity ... it lies at the foundation of salvation by grace through faith alone and is the bedrock of our (certain) hope of salvation.
What was finished?

And with His sacrificial death for sin completed in full, the price of His people's salvation was fully paid.

Salvation was no longer a thing of prophecy.

The reality of salvation had  come.

The point of all of this is best put (I think) in the words of a song we sometimes sing:

The new covenant deal with God for the way we get right with Him is done, then, the deal is struck and the price is paid.
We couldn't pay the price, but the price is paid by Him.
So WHAT can we offer as a 'Takeaway' point from this verse?

There are some heart-warming testimonies from folks whose names suggest they come from all sorts of languages and tribes and people and nations ... ones that will stand one day before the throne of the Lamb in Heaven because of this finished work of the Saviour ... under that song I linked you to on YouTube.
Let's allow them to give us our 'Takeaway' today ...
"Sin had left a crimson stain. He washed it white as snow. Thank you Jesus for saving me. You are my Saviour"
"Thank you Lord Jesus for saving me such a wretched sinner!!!"
"This song reminds of his Steadfast love towards me again n again. Thank u Jesus for paying for all my sinsl"
"I love this song it strengthen my spirit"
"Thank you for washing me in the blood of the lamb, Jesus. You are merciful beyond comprehension!"
"This song really make me strong to stand once again from falling"
"I love you Jesus Christ my Savior"
"Never think your sins are too big such that they cant be forgiven because Jesus Paid it All!"
Is there anything else that YOU would add?
Let us know if we can pray for you about anything that arises from this today by using the contact form below
at April 02, 2021

Audio Studiocam •          Introduction - resurrection is the dawning of Eden restored So far in our pre-Easter series ‘Hope for an Age of ... 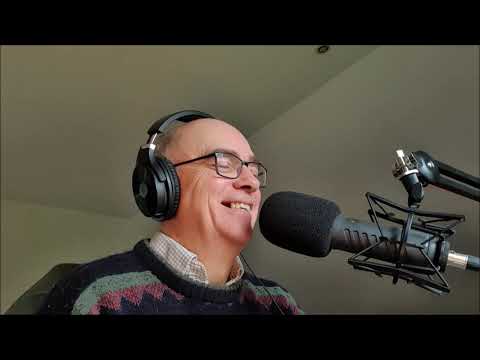